Stuporsonika is the production company, studio and record label of Daniel Söderberg, based in Stockholm, Sweden.

Since around 1997, after sound engineering studies, I've been working with music for dance performances, music and sound for film, commercials, album production, musical instrument construction and more. The company was formed in 2000.

For info about work for others, see the Work & Studio page.

For info about the Label, my own music as Dwayne Sodahberk and more visit the Music & Label page.

The new, all electronic, Dwayne Sodahberk album "Fintekno-2000" is out on bandcamp.

I made the soundtrack, it's released by Stuporsonika and available at bandcamp nov 6th. Visit Garagefilm for more info.

Listen to us here.

Barsebäck, the free-doom-noise-jazz band I'm part of has released a 7" this year on the label Jazz är farligt

I am compiling an album with unreleased popsongs by Dwayne Sodahberk to be released on bandcamp late this year. Noisy guitar-pop recorded mainly around 2006-2011. 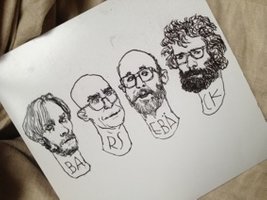